Arm knitting is an old yarn craft that has lately gained quite a bit of interest. It is a technique that enables you to come up with chunky garments in the shortest time possible. An hour may be enough to create a sizable blanket and the best part is that you don’t need any special tools to do this.

The interesting thing about arm knitting is that there are no needles required for stitching up the yarn; your hands do all the work! Overall, it is a great way for experienced knitters to keep their skills sharpened and an interesting challenge for beginners.

So, if you’ve been trying to learn this technique with little or no success, the following is a step-by-step guide on arm knitting that you will find useful!

How to Arm Knit

If you are already familiar with knitting using needles, then learning how to arm knit will be a walk in the park. The process is not much different; the only thing is that you’re using your arms instead of the needles, and each step is somewhat super-sized!

But if you’re completely new to the craft, understanding the essence of arm knitting will be a strong foundation for your knitting career. Essentially, there are four steps involved in the process of arm knitting. These include:

Before starting your arm knitting project, you should first buy the appropriate yarn for the job. Remember that you’ll only be using your hands, so you need a suitable yarn. Generally, arm knitting yarn is bulky!

The good thing is that you can go to the local craft store and ask specifically for super bulky yarn meant for arm knitting. However, if the super bulky yarn is not available at the store, you can improvise by using three strands of bulky yarn together.

The size of the yarn will be determined by how big of a craft you want to create. Ideally, you should use at least three skeins of super bulky yarn for an arm knitting project. But if you decide to go with three stands of three bulky skeins for the job, that you will require not less than nine skeins of the bulky yarn.

We’ve now come to the actual process of arm knitting. Typically, it should take just between 1 and 2 hours to complete the task, depending on how fast or slow you move. That being said, the following steps will give you a basic outline of what to do when crafting an arm-knit project:

Note that in this guide, we are assuming you did not find a super bulky yarn, so you’ll be using 3 skeins of a bulky yarn simultaneously. With that out of the way, place all ends of the yarns together, treating them like they are from a single strand of thick yarn.

Ensure that the yarn can smoothly uncurl from the skeins so that it's easier for you when you get started.

To start casting on, pull just about five feet of yarn from the skein to make what is referred to as the tail of your yarn. This is what you will use when casting on the first row of stitches.

Let the yarn drop to your lap or even floor if you don’t want to bear unnecessary weight.

The five feet of yarn will be adequate to cast on around 18 stitches, which is good for a small blanket. So, if you intend to make something larger than that, then lengthen the tail to seven or eight feet.

Begin by making a slipknot using some of the yarn you pulled out to make the tail. Do this by starting near the skein then work your way downwards.

For the slipknot, you want to make a loop inside the yarn then pull another loop of yarn through the first loop. Slip the loop onto your arm to make your first cast on stitch.

Continue looping the yarn and pulling the loops through to create additional cast on stitches then slip the stitches onto your right arm as the cycle repeats itself.

Keep on casting till you get to around 18 stitches, and this will be enough to make a small blanket or cowl. For a larger blanket, you can aim for between 24 and 30 cast on stitches.

Knitting on your arm is the same basic technique you use when knitting with needles. But you may find it to be a bit tricky at first given that you’ll be using your fingers to make the new stitches.

Take any free end of your yarn (not the one you set aside as the tail) and loop it around your arm.

Insert the loop into the first loop you made when casting on your arm, and as you pull it through, slide the loop off your right arm then slide another loop onto your left arm.

Repeat this process as you knit the stitches until you get to the end of your first row. 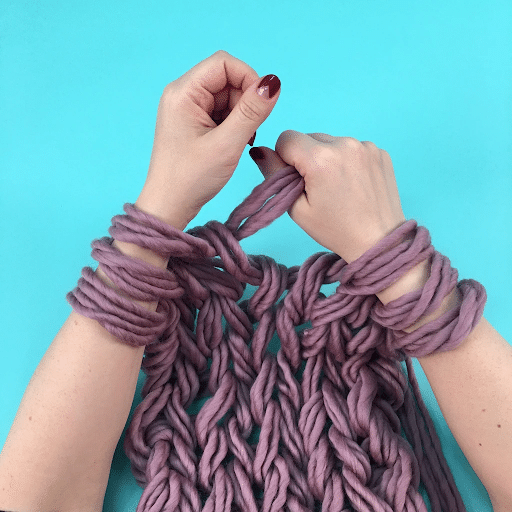 For the second row, you need to move the stitches back to your right arm.

In the process of knitting using your arms, you’ll be moving the stitches between your two arms, which implies that if you started on the right arm, then the stitches will be moving to the left arm by the time you’re done with the first row, and back to the right by the end of your second row.

Keep on knitting until you create a length you’re comfortable with. 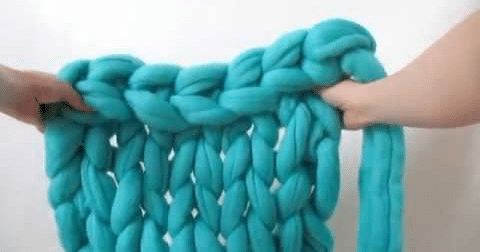 You will first need to cast off your stitches before finishing the blanket. It is basically the same thing you do when knitting with needles, whereby you knit the first two loops before proceeding to pull each loop through the loop behind it.

To begin, knit the first two loops in your row. Stop knitting and hold the first loop in the row using your fingers.

Pull the loop in your fingers through the second loop on your hand to secure it firmly and remain with just one loop on the arm.

Repeat the cycle of knitting one then looping the first loop over your second loop to continue casting off. Do this until you get to the end of the row and keep in mind that as you’re casting off, never have anything more than two loops on the casting off arm.

To finish your blanket, you need to join the two ends of arm knitting. You can do this using the mattress stitch. Seaming with a mattress stitch helps to put the seam on the wrong side of the created fabric, resulting in the front side looking joined.

To begin the mattress stitch, place the two arm knitting ends up against each other with the knit or right sides facing upwards. The working yarn should come on top and keep in mind that the ends should be of equal width.

To match these evenly, you may have to widen the cast on edge by slightly pulling it. The stitches should be flexible enough to allow this but take care not to overdo it.

Take your working yarn and bring it underneath your first line of stitches then pull it all the way.

Shift the yarn to the left side then bring it under the first line of stitches before pulling it as you did on the right side.

Repeat this process as you alternate from the left to the right side until you seam the entire length of your project. Try to ensure that the stitches being made are loose enough to make the yarn you have run through appear like an independent line of stitches.

Weaving in the Ends

Flip the blanket you’ve created to the purl side so that you can weave in the working yarn on the wrong side of your creation.

Start by weaving the yarn over then under loops on the cast on edge.

Tuck your yarn under several stitches in the seam then cut before moving to the other side of your blanket and weaving in the tail.

Do this in the same way you did when weaving in the working yarn and cut the end to finish off.

At this point, you’ll have successfully completed your maiden arm knitting project. You should be holding a gorgeous and well-made blanket that you can show off to your friends or family!

If you are considering learning the craft of knitting and making a career out of it or taking it up as a hobby, one of the most fundamental techniques  you’ll have to learn is arm knitting. This is a useful technique that only the pros can claim to have.

Luckily, you can join the exclusive club of arm knitters with the right guidance. Consider the post above when you decide to embark on your first arm knitting project.

Can I Pause in the Middle of an Arm Knitting Project?

So, what happens if something interrupts you when you’re in the very middle of arm knitting a cowl. Supposing someone rings the doorbell when your arms are covered with intertwined yarn; what do you do? No need to worry…it is actually possible to halt your project even before you finish, and what will surprise you is that it is pretty easy too!

All you need to do is transfer each stitch, one after the other, onto a new stitch holder. A stitch holder can be anything relevant laying around. From a broom handle or any kind of a stick to a cardboard gift wrap roll. But if you can’t find any of these items around, some experts suggest that placing your stitches on a lengthy scrap piece of yarn will do the trick.

Anyway, you will have to remember whether the last row of stitches was on your left or right arm. This is because it will be easier for you to pick up where you left once you have gotten rid of the distraction. 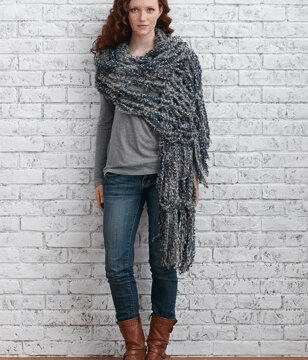 How Do I Knit with Multiple Strands of Yarn?

Most knitters will usually double, triple, and even quadruple up on the thinner yarn they have to achieve thicker and chunkier yarn. To do this, you need to start with several balls of yarn then hold the ends of the different strands together as you cast on. While knitting, continue working from the separate balls of yarn because if you wind the strands beforehand, it may end up being a tangled mess.

Knitting For Seniors: What are the benefits?

Knitting For Seniors: What are the benefits?